Langtang valley, the closest trekking destination to the capital city of Kathmandu is the site of the largest single catastrophe of the 2015 earthquake and over 300 are estimated who met with the tragic incident. The Langtang valley that got immeasurably wrecked was the next destination on our list for restoration. Once again the MMA team including the chairperson set out for the survey. 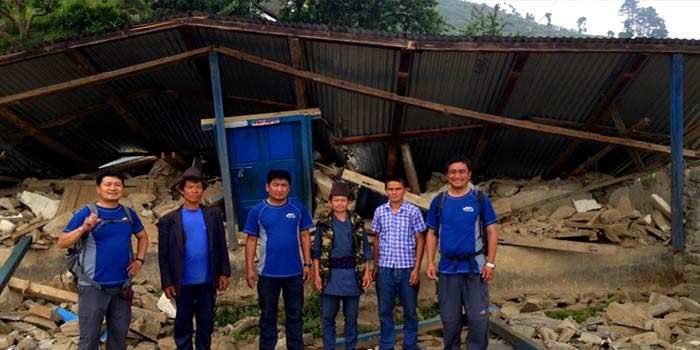 The survey team was greatly traumatized to witness the demolition of the school building and was certainly thinking what would have been the gravity of the tragedy if only the earthquake had occurred sometime during the weekdays – it could have cost the lives of thousands of innocent kids. In Langtang, Rasuwa district building schools appeared more significant to which the team geared up for the reconstruction. We build about five schools three shelters, a water supply project, and three health posts in the district of Rasuwa and the account of it goes as follows. 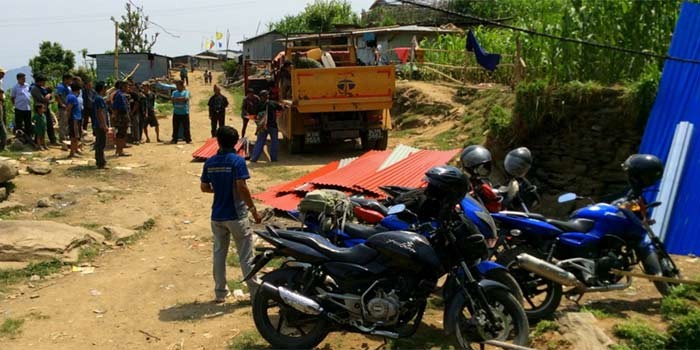 Due to the shortage of fuel, we had a hard time finding the load-truck to transport our building materials for the school. After much negotiation, we finally managed to get one who realized the good work that we were up to, and soon all went well. Once we got to the village – villagers including the students were all prepared to help to get the materials at the right place. 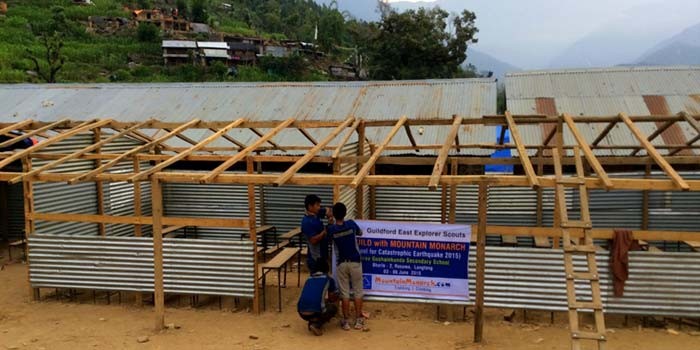 One of the biggest schools in the region, Titanic size that we were to build as the number of students in this school of Langtang region was pretty vast, but with the support and the consistency of the MMA team, it didn’t take longer then we had speculated. 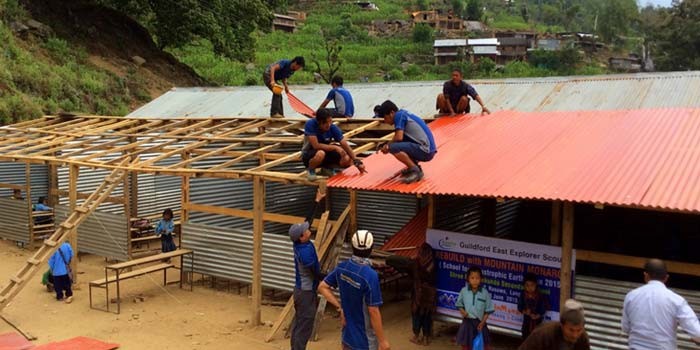 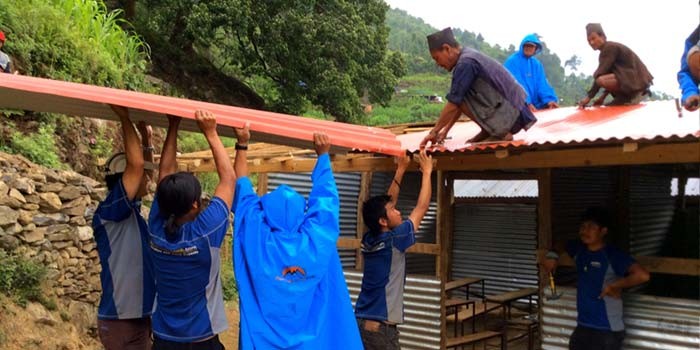 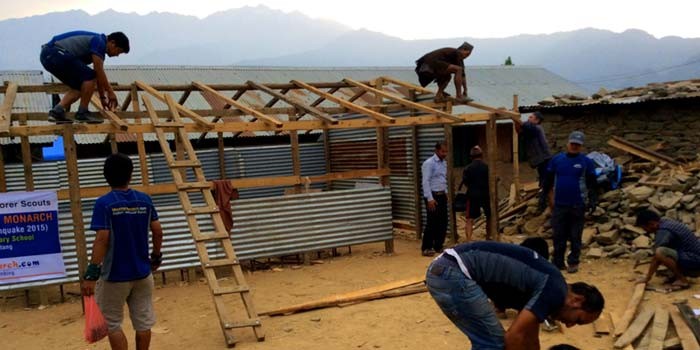 The team gave their best to finish the started project of constructing the school and didn’t bother about the high temperature or the heavy rain. We didn’t stop nor did we take a break, we went steady and we did achieve our target of finishing it in good time since the school was to resume the next day. Had we not done it for the sake of those little kids who were very eager to see their new classrooms they would have been sharing the tarp-tented classrooms in the burning heat the next day. Thanks to the MMA team. 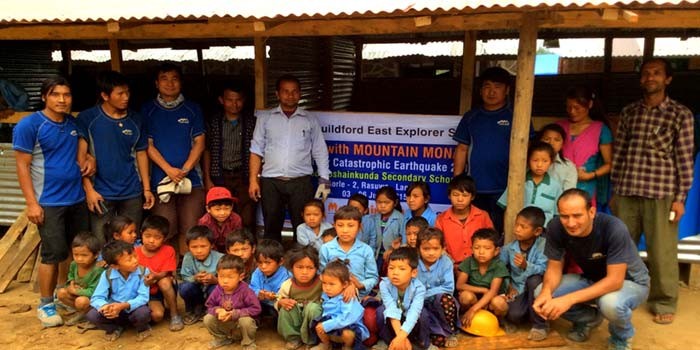 After the completion of the school, we took a picture with the happy kids who showed up to help us through the day despite being a holiday. They were very pleased and we were very delighted to see the sunny smile on their face and the way they were acting and getting prepared for the next day's class.

The next morning we divided our team into two different groups for two separate schools under the coordination of two professional leaders. Soon after breakfast team, ‘A’ hiked 500m below to the bottom of the valley to the village of Bansbhanjhyang where the MMA team was to build a reasonable size classroom for the primary school. This was definitely very crucial regardless of the size of the students as their cozy building was sternly hit hard by the earthquake and was shrunken to the ground. And thanks to the villagers who equitably assisted the team transporting the materials, making grounds for the pillars and of course the fabulous lunch. 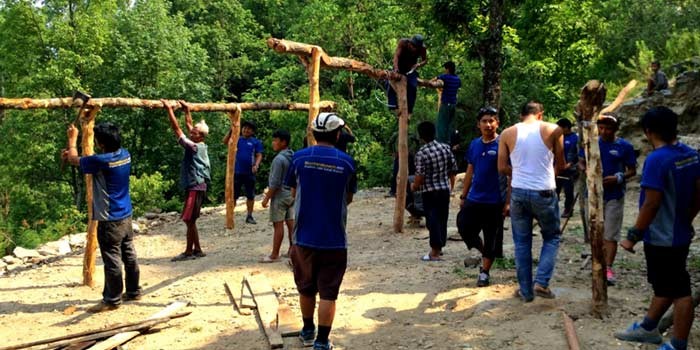 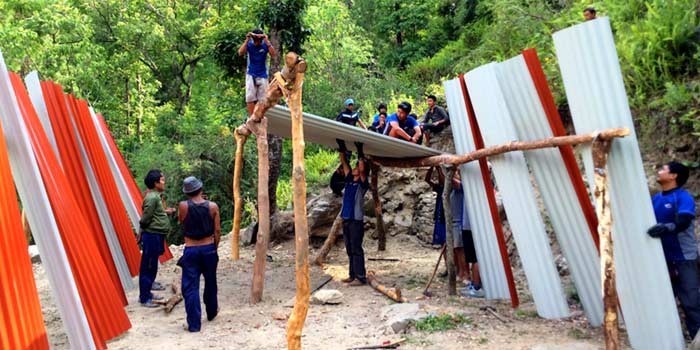 Once again the team getting all wrapped up for the job they were assigned for. 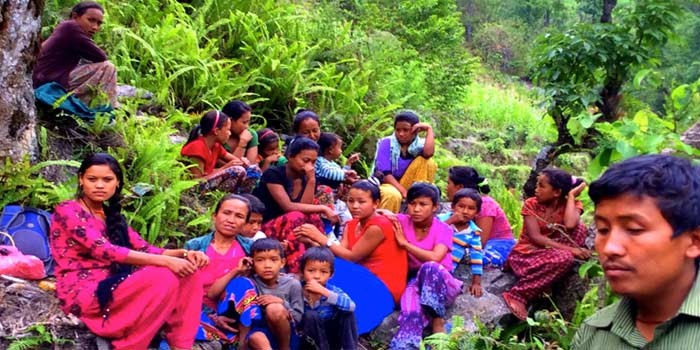 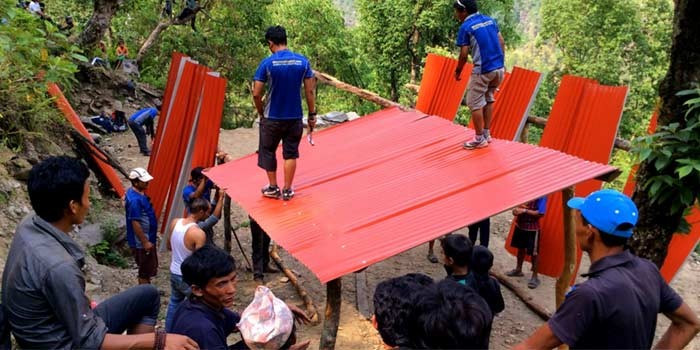 The villagers of Bansbhanjyang were quite curious about how their new school would turn out like build by these amateur designers which at the end of the day turn out great. 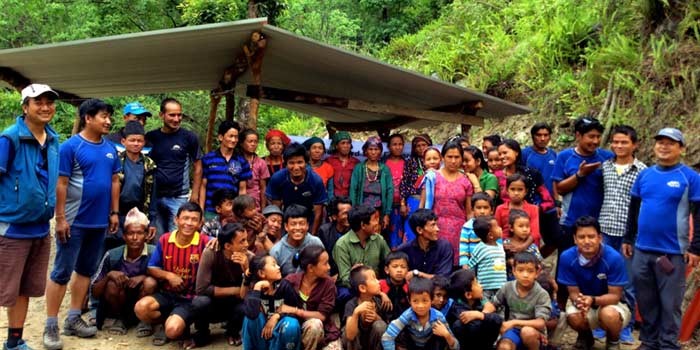 By the time the job of the second school in the region of Langtang was done and as we hiked up to our local shelter for our days off, Team ‘B’ had just got overbuilding the third school that was in-between the first and second. Hats off to our team for a great job and then together we took off giving it a break for our next day’s mission.

This was our third conjugative day of incessant working in the region of Langtang building schools. On that particular day, we ascended roughly 300m to the beautiful village of Betang. This primary school had a reasonable size of students and happened to be one of the oldest school ever established in the province. Mr. Pradeep Limbu the chairperson of Mountain Monarch was without a doubt a vital part of the entire Langtang project who shared a good amount of inspiration and supervision. 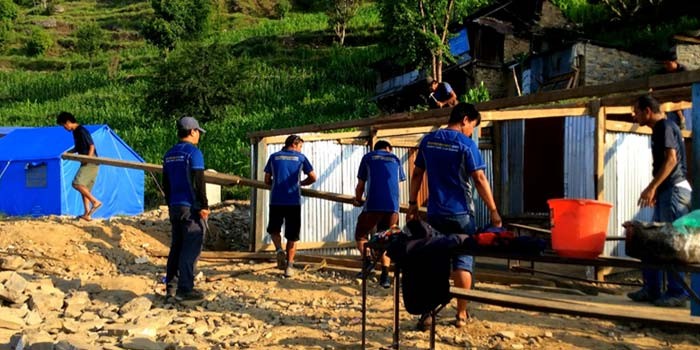 The moment we got to the site the team as usual got to their full swing with a great sense of humor and smiles. Few inspected the site and with the instinct, much of a professional engineer started with the task of building a school that would certainly be worth our effort. They didn’t need supervision; automatically they divided themselves into several small sets and did things they thought best that would eventually make things more appropriate and attainable. 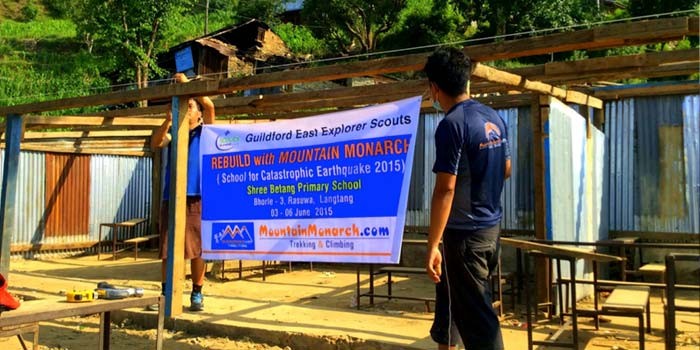 School of Betang being of reasonable size pillars are to set up for the borderline, roof support, and additional pillar backing. 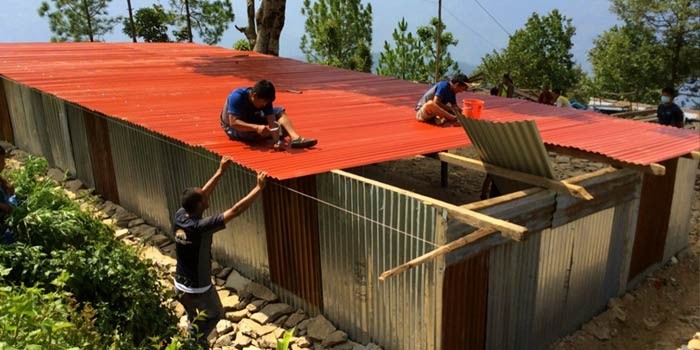 Since the time we started with the rehabilitation project of building shelters, schools, and health posts we didn’t have any extensive equipment like a driller, molder, or chisel but we did cope to do a lot out of basic tools. It could have taken days for a normal person to build the size of the building that we were to construct in the village of Betang but our team-work was designed in a way that a day was enough. 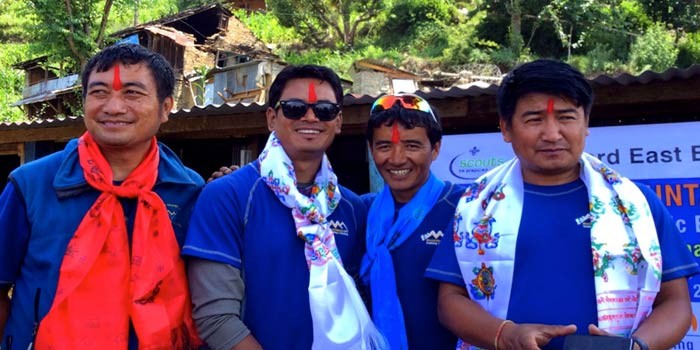 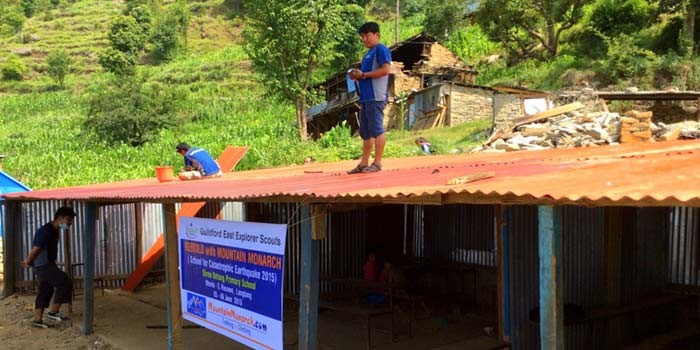 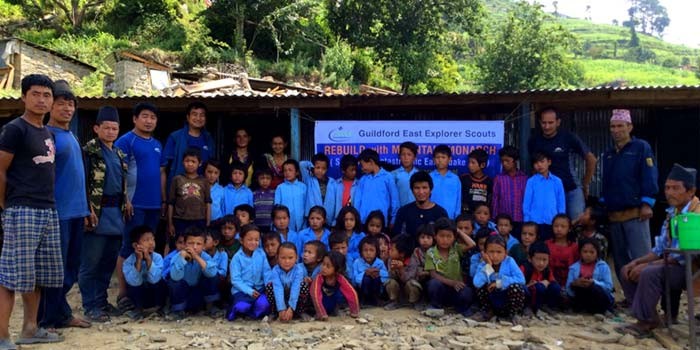 After the accomplishment of our assignment, we were once more felicitate by the villagers with vermilion tika on our forehead and holy scarf. Some of our team out of fun interviewed a few of the students on what they think of our effort and what grading they would give us for building their new classrooms – to our astonishment their answers were way escalating than we had expected – they said – they weren’t supposing that anyone would be generous enough to come over to their remote settlement and do the things that we did. They were more of a hope of relief tarp-tents from the private or government organization. Each of them gave us 10 out of 10 and some rated us with million hilarious stars. Soon we were led to a place where villagers had gathered to felicitate us again with a great dinner and local wine. The next morning we were given a great farewell and most walked with us to the bus station to see us off where we had parked our motorbikes. Our next project was building a health post in the same region week later which apparently means back to Kathmandu and a week off.

A week later once again the team set out for Rasuwa, Langtang region to restructure the health post as people with common ailments were having a hectic time standing in a queue and being examined in the open against the violent summer heat. So Mountain Monarch was determined to build a health shelter that would ease the villagers and were desperately pining for our arrival.

The team arrives and without troubling for a tea break they underwent relentlessly with their tasks of construction as the weather didn’t look much promising that day. It didn’t take long for us to set up the framework as by this time we were reasonably specialized in the in structure procedures. 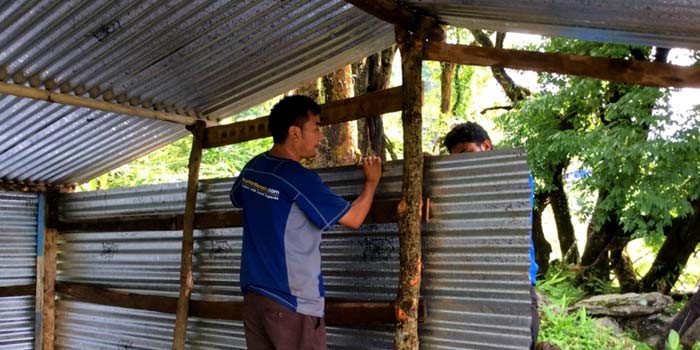 This time with the health post the MMA team includes leaders, assistant guides, and even the city tour guides who permanently work with mountain monarch. The equal share effort was very well maintained till the completion by which time the villagers had all assembled for another felicitation. 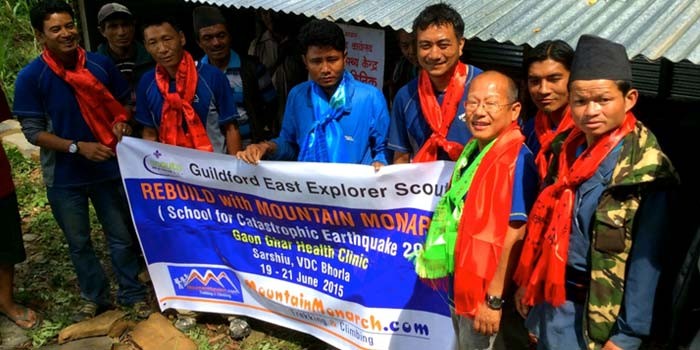 It was indeed a great moment to treasure serving the people of these remote areas who were in grave need of liberation from the tragic incident that devastated them and their hope of advancement. Now we were to head back to the capital and prepare for our next assignment in the village of Pokhari, Dolakha district for the rehabilitation of another school with the slogan “Rebuild with Mountain Monarch”.