Being experts, not only do we organize safe and responsible adventure trips, but also aware of our Corporate Social Responsibility and do some real social work to bring changes to local people. Anybody could liberally ask if their trip with Mountain Monarch to Nepal contributed to any welfare undertakings to bring about changes in the life of the local community. Mountain Monarch being a Responsible company, we say YES. Despite our prime focus on safety measures while leading our trips in the Himalayas, we are correspondingly committed to our Corporate Social Responsibility (CSR) policy and activities, motivating community progression and development in the meantime honoring the environment, culture, and the local community.

We comprehend our Corporate Social Responsibility (CSR) and have incorporated the CSR approach in our business model, contributing to sustainable developments. Mountain Monarch, a homegrown company, is making every effort to make a difference, a communal transformation – striving for social well-being. We genuinely believe that we are liable for every consequence of our actions on the environment, employees, communities, and everyone involved. Therefore, we are more into learning ethical values and cultivating skills through fieldwork and various exposures shaping up the overall outlook of an individual and preparing ourselves as a mediator for social change. 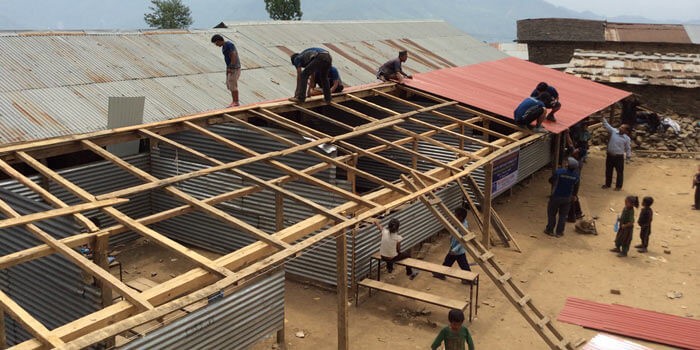 Furthermore, business isn't about private greed; it's more about good public balancing and delivering profitable, sustainable progress for our consumers, employees, business partners, communities, and the planet we inhabit. Accordingly, Mountain Monarch has been involved in social activities since 2006, educating the Porters Children, building the Pure Drinking Water Project in various remote settlements, and rehabilitating schools after the devastating 2015 earthquake; we have still undertaken diverse earthquake relief assignments.

Five years after the company's establishment, Mountain Monarch developed the novel awareness of being socially responsible by educating underprivileged children who are deprived of their right to education owing to poverty, household work, or lack of schooling facilities. For the decade, with the slogan "Making Life Better," Mountain Monarch has been funding the education of the Children of porters who have been long working with the company. The objective of this program is to afford school-level education to the eligible porters' children till high school in a reputed government institution endowing them with a better life perspective.

To date, we have more than 20 eligible kids from different mountainous regions of Nepal, including Solu Khumbu district (the foothills of Mt. Everest), Rasuwa district (the valley of Langtang that met with the tragic catastrophe in the 2015 earthquake), and Dolakha district (the second calamitous area during an earthquake). Every year Mountain Monarch contributes a sensible deposit into the Porters Children Education Fund that proficiently carries out the overall education compensation of these kids.

The making Life Better program is confident of educating more children in the coming years to position these unfortunate kids in light of enlightenment from the darkness of innocence. We genuinely believe in the right to education, and it's been very wisely said children without education are like a bird without wings; hence Mountain Monarch is determined to accomplish this social responsibility of educating innocent minds.

Mountain Monarch is proud to announce and introduce the responsible trekking policy ONE TREKKER: ONE PORTER strategy on our trekking and climbing trip above 4000 meters in the Himalayas. We aim to motivate all the trekkers and tour companies to follow the policy to bring up a better life for trekking porters and create more jobs for the locals. The personal porter is like having your own Sherpa hiking next to you. He carries a much lighter weight, around 15 Kilos, than any other porters you encounter en route. Thus, the ethical way of dealing with porters enables them to work longer and spend extended, healthy lives supporting themselves and their families. Trekkers will benefit, too, as they will directly interact with the porters, who will be happy to share first-hand information about their culture and lifestyle. Some will probably become valued friends and best memories of being in the Himalayas. Your Adventure trip in Nepal undoubtedly helps the local people and their families.

Water is the main component of all living beings, and drinking healthy water is vital. In association with the Guildford East Explorer Scout group in the UK, Mountain Monarch has been supporting on Pure Drinking Water Project 2007 in Nepal's remote region. Mr. Bernard Pentecost, Scout Leader and project coordinator designs and develops project sketches by applying his long-term experiences in water Engineering. A young group of scout teams emphasize the project and encourage their parents, community members, and associates to participate in project implementation.

So far, Mountain Monarch has successfully run eight drinking water projects in different regions of Nepal. We make the involvement of local communities with their volunteer participation during the project mandatory to realize the sentiment on project objectives so that they can resourcefully nurse it after the projects have been handed over to the community. As for now, Mountain Monarch is into a restoration project for all the earthquake-wrecked water project that was previously installed.

After the 2015 earthquake, Mountain Monarch has undertaken several school rehabilitation projects in several remote areas that were utterly ruined by the tremor, specially Dolakha and Rasuwa District, the main epicenter of the tragic earthquake. To date, we have succeeded in rehabilitating more than five schools. Moreover, we encouraged the active participation of the local community, which unquestionably played a vital role in strengthening their abilities to contribute to a great social cause. Besides, in these rehabilitated schools and several other remote educational institutions, desktop computers were provided as per the size and number of students. The idea of donating computers was approached by our survey team, who sensed the necessity of practical computer classes in these regions as the students only had the basic theoretical information about computers without seeing it in reality.

After the devastating 7.9 magnitude earthquake that occurred on 25th April 2015, Nepal was undeniably more than ever in desperate need of support. We were undoubtedly traumatized, but amid multiple aftershocks and uncertainty, Mountain Monarch sent its survey team to assess the condition of the community. Assessments were made to rehabilitate local shelters, health clinics,s, and drinking water supplies. Mountain Monarch collected an inspiring contribution from national and international friends (our clients), which indeed played a fundamental role in accomplishing our re-enactment and healing program for the sufferers. Through this relief fund, we supplied the necessary materials. In addition, we provided all field staff who consistently gave their best and managed to rehabilitate more than 20 temporary houses, one good size health post, and two schools.

Here are some links below to check the Details of Mountain Monarch CSR: