Pristine Gokyo lakes and Everest at one shot from Rinjola 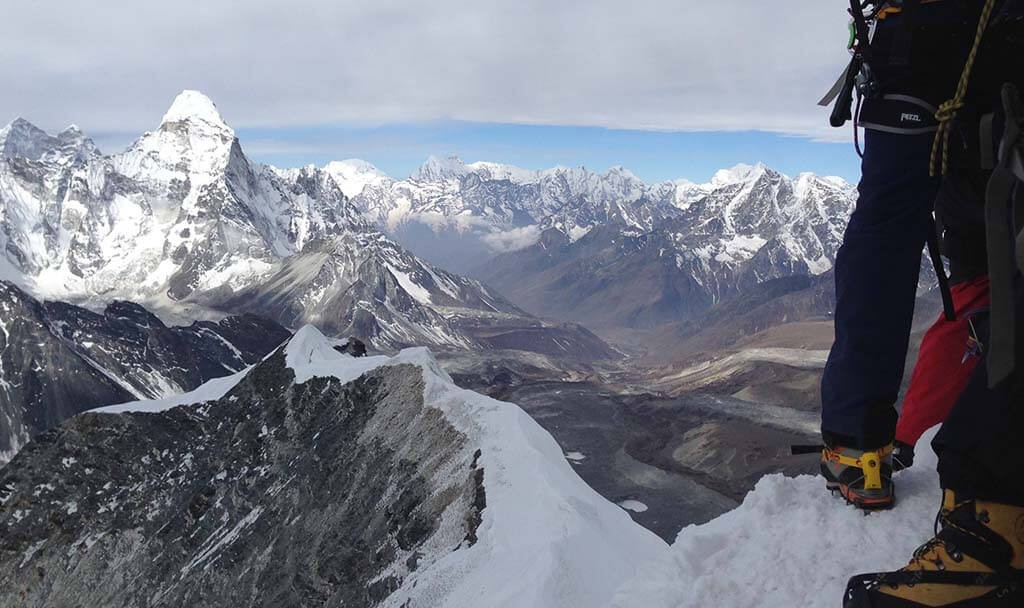 Our group on summit of Island peak on 2016

Our climber climbing up with proper safety back up

If you are looking for a complete high passes trek to peak climbing adventure in Himalaya. The obvious answer is to join the Everest high passes and peaks which include the climb of Island. It explores 4 valleys, crosses 2 high passes, and climbs 3 peaks all in one exciting adventure. This strenuous and picturesque trip fulfills the dream of every amateur climbers and serious trekkers to experience the thrill of adventure to extend their experience to actual peak climbing beyond simply trekking in Himalaya. For this challenging trip, you will need to have a good standard of fitness, stamina, and some prior trekking experience.

We check the gear before we take an exciting flight to Lukla to begin our adventure journey. We explore and ascend some remote high passes and peaks to view some of the most incredible, awesome mountain vistas beyond imagination in the Everest region. We trek the less trodden Thame and Gokyo valley trails to the popular Khumbu valley and then Island Peak valley. You will witness truly unforgettable Himalayan vistas from each of these vantage points like Rinjo La, Gokyo Ri, Cho La, Kalapathar, and Island Peak.

We also explore the Everest Base Camp the ultimate goal of so many trekkers before the Island Peak. We organize the climbing training course at Island peak base camp before the summit push. Obviously, comprehensive training on various aspects of climbing techniques carried out by our expert climbing Sherpa. Thus to ensure that you are completely knowledgeable and therefore safe to climb. Your historical climb to the Island peak will be rewarded with one of the best panoramic summit views in the Himalayas. You feel so close to Lhotse, Nuptse, Baruntse, Ama Dablam and Makalu, that you could almost touch them - a truly magical experience!

To ensure that you have a hassle-free adventure. We provide all the personal and group climbing gear including the La Sportiva climbing boots. We stay in tented camping whilst on the climbing and at a tea house while trekking. Thus our Everest high passes peaks trip gives you the experience of both tea house accommodation and camping in one trip.

Detail day to day trip itinerary of Everest high passes and peaks with climbing to the Island peak and two high passes of Rinjo and Chola with Gokyo Ri and Kalapathar at its best vantage points.

Climbing the Island peak with high passes traverse trekking over Renjo and Chola and hike to the Gokyo Ri and Kalapathar for proper acclimation. Join the confirmed group departure dates trip to high passes and peaks at an affordable cost for the year 2021and 2022

Thank you, Pradip and your team (Yugal) again for the wonderful Everest high passes and peaks trip. .Our trip, was like Swiss standard – awesome planed and excellent success.

I cannot thank you enough for your kind generosity. We had a great time on our trek. I do not think you could improve the trek in any way.

The staff did everything in their power to make our trip enjoyable and safe. It was truly a trip of a lifetime and the mountain monarch did an outstanding job. I will defiantly recommend this trip and this company to everyone I know going to Nepal. We had a wonderful time.

I spent 3 weeks in a small group doing the Everest High Peaks and Passes trek with Mountain Monarch in November 2013. Our guides were Ngima and his brother Nuru, both of which I cannot recommend highly enough. It was my boyfriend’s interest in climbing Island Peak that led us to use Mountain Monarch. We wanted to use a Nepalese company, they offered a well-thought-out route, and the price was very competitive. We were very happy that we had made that choice. From our arrival in Kathmandu when we were met by Ngima we were very well looked after. We have been to Nepal several times in the past, and have stayed in a few places in Kathmandu, and we liked the trek lodges that Mountain Monarch used there very much. The staff there were friendly, and it felt very comfortable. Ngima gave us a thorough briefing before we left to fly to Lukla, and throughout the trek was ever-present to offer help, advice, and information on the areas we were in and going to. Our group of 8 was a mixed experience and mixed ages but got on very well. Ngima used to sit and play cards with us around the dung-burning stoves at night. We wished we could have spoken to our wonderful porters more, but the language was a big barrier. While Ngima and Nuru guided us, the porters would carry our bags, sleeping bags, food, etc along the same route that we were struggling along just with our day packs. They were amazing young men.  I found the trek very hard at times, but however frustrated I was Ngima and Nuru always had a smile and a jolly countenance to keep me going. At Island Peak only my boyfriend made it to the summit, 2 of us turning back before reaching the top and the others in the group has stayed in the nearest village due to both mild and not-so-mild altitude-related ailments. I only got as far as I did because of the tremendous trust I had in Ngima, and my boyfriend said he would not have continued to the summit without me had it not been that it was Ngima who would accompany him (I had a climbing porter to escort me down and felt very safe in his hands).  Yes, the trek is hard, and the teahouses along the route are cold and basic, but the views are stunning, the people who run the teahouses are lovely and do the best they can make you comfortable. The sense of achievement I felt after completing the trek was worth the effort a hundred times over.  I highly recommend Mountain Monarch for their people, their equipment, their attitude to safety, and their customer service.

Mountain Monarch were excellent from start to finish

When I was planning such a long high altitude trek and summiting Island Peak I was initially thinking of paying a bit more money and using a UK company. Mountain Monarch, however, was excellent from start to finish. Pradip answered all my inquiries quickly and informatively. Our mountain guide Ngima met us at the airport on arrival in Kathmandu and everything went Nepal smoothly from then on. Most importantly, MM used good lodges throughout the trek, the porters were great, enthusiastic, and had the decent gear to wear, etc. Ngima had lots of experience and did a great job keeping 8 Trekkers from different corners of the world happy. Up at Island Peak MM used very good quality climbing equipment. this is crucial as summiting Island Peak should not be taken lightly. It was extremely cold in Mid November, it’s very very steep and surprisingly technical as many have said before, this is a technical trekking peak for sure. That being said, reaching the summit just after sunrise was a thrilling achievement, and I felt completely safe with Ngima Sherpa who was a climbing guide before becoming a lead guide.
Much of the high Everest region is between 4500-5500 m, and in November is very cold. We witnessed a surprising number of people being evacuated suffering from altitude-related medical issues. Mountain Monarch provided a very professional itinerary, with productive acclimatization days, and provided a very professional service throughout for the amount we paid.
I would absolutely recommend Mountain Monarch for any trekking/climbing trip in Nepal, and if we return we will use them again for sure

Based on 528 traveler reviews

Know before you go
Read reviews  |  Write a review