Mustang Trek - Then and Now

Upper Mustang Trek explores the concealed valleys of the restricted region of Mustang in the Himalayan Kingdom of Nepal. This Mustang trek unfolds the mystery of the walled kingdom of Upper Mustang. Interestingly this region is nestled between Tibet and the Himalayas - a place different from the rest of the world, once forbidden by the Buddhist Kingdom in Nepal. The walled city of Lomanthang used to be a part of the Tibetan kingdom of Gungthang until the 1830s. The early history of Lomanthang is embellished with myths and legends rather than recorded facts. Even though it is changing, it still surprises visitors with its stunning vista and the stubborn way it clings to its unique culture. Indeed the culture is fighting back, and crumbing artworks are being restored. Crumbing monasteries have been rebuilt and refilled with the sound of bald children in robes studying the ancient Buddhist ways.

There are around 275 houses in Lo Mangthang, having four castes. The royal castle, the everyday folk, the blacksmiths, and the butchers and millers. The whole of Lo Manthang village has solar electricity nowadays. Decorative style small herb garden of various holy decorations, flapping flags, and stacked firewood. There was a time when certain families needed to supply firewood for the royal family. Sky burial and polyandry remain in practice in this upper mustang region.

It is believed that Guru Rinpoche had fought with demons among the Mustang's snow-capped mountain, desert canyons, and grassland. Once Guru Rinpoche killed the monster, he scattered the demon's body parts across the Mustang valley. Consequently, its blood formed the towering red cliffs, and its intestines tumbled near Ghami, where people later built the stone prayer wall. Thus the longest prayer wall in Nepal on top of the demon's intestines is still on display.

Upper Mustang Trek in Nepal was officially opened in 1992. However, minimal numbers of trekkers are only allowed each year. Thus protecting and conserving the local Tibetan tradition and the fragile environment of Mustang in Nepal. It unfolds the fabled forbidden kingdom's vast and arid valleys, eroded canyons, yak caravans, and of course, the mysteries of hidden sky caves in Mustang bewilder the visitors. Furthermore, the colorful-painted mud-brick houses are next to the majestic mountains of Nilgiri, Annapurna, and Dhaulagiri ranges.

Surprisingly, Mustang Trekking is one of the best treks to do, even during the monsoon season in Nepal. Hence it lies in the rain shadow, north of the Annapurna and Dhaulagiri ranges, completely sheltered from the monsoon. We take the return Pokhara Jomsom Pokhara flight to avoid the lower rainy section hike in the Annapurna region. The best advantage of doing this cultural and restricted region trek during monsoon time is that the village is full of local people busy with everyday work. Furthermore, the whole region is in bloom, contrasting with the wind-eroded hills, red cliffs, and snow-capped mountains in the background – an incredible vista. Thus the trekking experience to the medieval walled kingdom of Lo Manthang in Nepal is a once-in-a-lifetime destination.

Being on the lee wind side of the Annapurna Himalayan range, it won't rain much in the northern Mustang region is one of the best trekking destinations even in the Monsoon season in Nepal. Of course, Spring or Fall is the ideal time to go for the Mustang trek. We have our set group departure trip dates for 2023 and 2024 to join it. With a group of family and friends, we can customize the trip dates and itinerary at a reasonable trek cost based on your time duration and requirements. 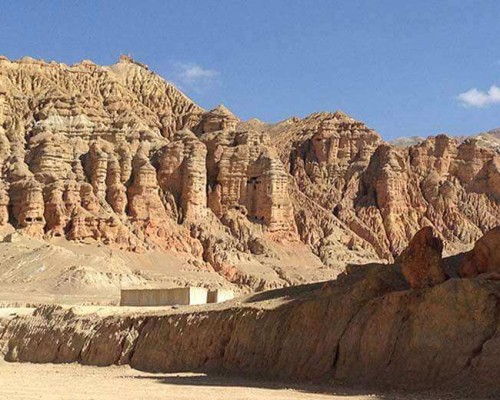 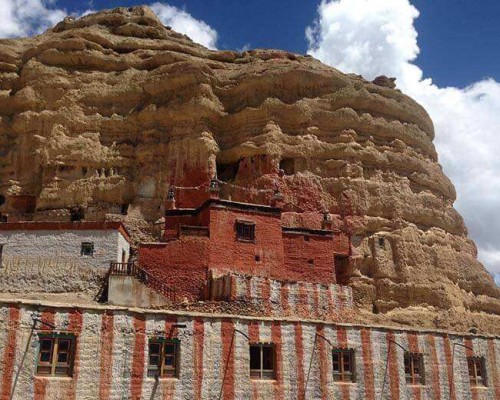 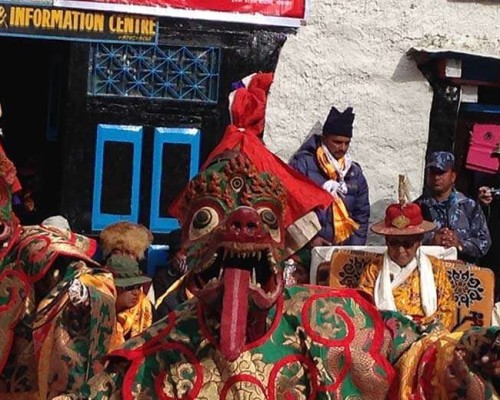 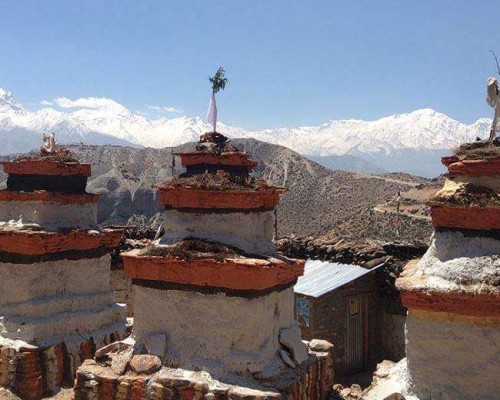 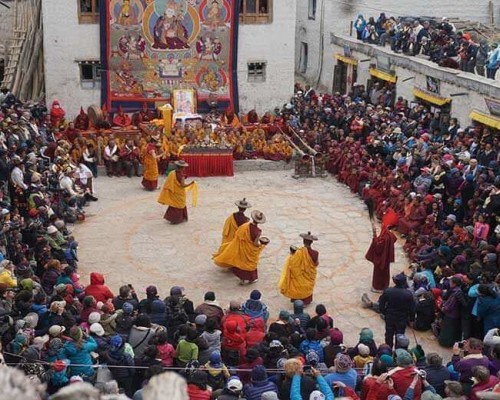 Soon you land at Kathmandu airport your group leader will be there to greet you and transfer you to the hotel.

Visit Boudhanath Stupa and Pashupatinath. Flying or the other Today, after the cultural tour in Kathmandu we drive to Pokhara for an overnight stay at the hotel; Pokhara is the second biggest city in Nepal.

A short morning flight to Jomsom, the district headquarters of Mustang, through the world’s deepest Kali Gandaki Gorge with the glorious view of Annapurna and Dhaulagiri is exceptional.

Having completed the permit formalities today, we enter the restricted area of Mustang. As said to be the desert of Nepal, the valley widens with barren and arid surroundings with green villages in the middle that appears more like a simply incredible mirage.

Today's walk is more into undulating trails with steep climbs and descents. However, despite 6 hour's walk, the fantastic canyons with their unusual color that opens out are extraordinary. In this bizarre, the farming fields with rich red buckwheat and brilliant green and the south view offering you a panorama of Nilgiri, Annapurna, Tilicho Peak, and YakawaKang add up to its magnificence.

From Syangboche, we climb gently to a small pass of 3,800 m/12,467 ft with extraordinary views of mountains and deep valleys into the wind-eroded canyons. Today’s walk is effortless, with few short climbs in between, but the beautiful scenery alongside would hardly allow us to realize the passing away of time and arrive at Ghami for lunch.

This short trek to Tsarang takes us into the 'Land of Chortens". This trail marks the history and legend of the Indian saint Padmasambhava (750-810 AD), the founder of Tibetan Buddhism who created a fusion of Buddhism with the original Shamanistic religion of Tibet called Bon – whose influence upon Indian Buddhism makes Tibetan Buddhism so fascinating.

Finally, we get to the plateau of Lo Monthang, ‘The Capital city and the Plain of Aspiration’ of Mustang. The fabled walled city of Lo, the kingdom with a single entrance, is a welcome sight! The king, “Lo Gyelbu,” named Jigme Palbar Bista, still resides at his four-storied palace inside the walled city of Lo Manthang.

Lo Manthang, the capital city of Mustang, contains about 150 houses and has some of the largest and finest Tibetan Buddhism Gompas in Nepal. The town is absolutely fascinating, with four major ancient Monasteries, which are impressive, and an enormous 14th-century palace imposing a 4-story building in the center of the city.

After breakfast, your leader will organize a jeep for the Chhosar excursion.

What u see in Chhosar:-

Today we will walk different west terrain which offers you the most beautiful view despite a few steep downhill trials. Then, we visit the world’s oldest Tibetan monastery, Ghar Gompa, built around the 7th century by the incarnated monk Padmasambhava.

We trace back to the village of Syanboche, where on the way back, you have ample opportunity to look back into the missed-out views.

We again trace back our trail towards the south. We start early today to visit the Chungsi Cave Monastery, which is one of the most attractive among all cave monasteries of Mustang where the Saint Padmasamvaba meditated around the 7th century. But be prepared for all the steep ascent.

We again trace back our trail towards the south.

We take an early morning flight from Jomsom to Pokhara – a fantastic way to round off the trek, flying right along the Kali Gandaki Gorge between the Annapurna and Dhaulagiri ranges. Catch other flights to Kathmandu. Overnight stay at Hotel.

Today we take the scenic drive back to Kathmandu, which takes around 6 hrs. There is an option to have a flight to Kathmandu from Pokhara at an added extra cost as required.

It is time to fly back home, keeping all the exhilarating experiences of Nepal in mind. Please ensure you have collected any valuable deposits from the Mountain Monarch security department. Those people traveling by aircraft to the other destination will be transferred to the airport and assisted with check-in procedures.

We offer many groups joining trip departure dates for the years 2023 and 2024 to join this trip. Here are the Upper Mustang trek departure dates and all-inclusive trip costs.