Experience one of the best offbeat treks in Nepal. This Tsum Valley Trek is ideal for those who want to explore the remote and less trodden hidden valley trekking experience in the Himalayas. Tsum Valley is a part of the Tibetan Plateau that lies in the remote Himalayan section of the Gorkha District. The three-week-long Tsum trekking takes you along the traditional Tibetan settlements of the Tsumba people towards Mu Gompa, Rachen Gompa, and Gonhgye Gompa. Local people at Tsum valley still practice the polyandry system by marrying a girl among all the brothers in a family. Very few adventure travelers have made it to this high and mysterious hidden valley, which used to be an important trade link junction between Nepal and Tibet. Witness the remote lifestyle and occupation of the Himalayan tribes residing in the Chumche and Chhekampar valleys of Tsum. The exposed glaciated valley of Chhekampar offers magnificent views of Ganesh Himal (7422 m), Sringi Himal (7165 m), and Boudha Himal (6672 m).

Tsum Valley Trek begins upon your arrival in Kathmandu City. Before embarking on the trek, you'll indulge in a brief cultural sightseeing tour around the historic city. Home to seven different UNESCO World Heritage Sites, you will visit numerous tourist destinations such as Swayambhunath, Pashupatinath, Kathmandu Durbar Square, and Boudhanath. Leaving Kathmandu Valley, you’ll embark on a whole day road journey along the enormous Trishuli and Budi Gandaki Rivers towards Arughat Bazaar. Arughat in Gorkha District offers access to the remote Tsum Valley. The trail gradually advances upstream along the Budi Gandaki River. Witness the traditional settlements located along the banks of the Budi Gandaki.

The Tsum valley trekking trail rises towards Soti Khola and continues to climb upstream towards Machha Khola Valley of the Manaslu region. Then, you’ll enter the Lower Tsum Valley or Chumche. Walk past Philim and Chumling village to enter the Upper sum Valley of Chhekampar. As you enter the high valley, you’ll begin witnessing the rugged terrain and glaciated path.

Apart from the Tibetan Plateau, you’ll get to witness the traditional Tibetan settlements. Continue trekking upstream along the Shiar River to arrive at Mu Gompa. The Mu Dephyudonma Gompas are the largest and the highest Buddhist monasteries in the region. Leaving Mu Gompa behind, you’ll begin traversing Rachen Gompa and Gonhgye Gompa before retracing your path back to the Soti Khola trail. The trail gradually descends downstream along the Budi Gandaki River to arrive at Arughat Bazaar. The Tsum valley trek concedes upon your return to Kathmandu. Trekking to another trekking route to Manaslu en route to Tsum valley is another high light on this Tsum Valley trek in the Himalayas

Catch the breathtaking view of Ganesh Himal, Sringi Himal, and Boudha Himal along the trail. The scenic trail follows the ancient Kyimu Lung pilgrimage trail that explores the legacy of Guru Milarepa. Visiting Milarepa Piren Caves is another highlight of this trek. Along with obtaining the restricted area permit for the Tsum Valley trek, you must obtain the permits for Manaslu Conservation Area Project (MCAP) and Annapurna Conservation Area Project (ACAP). 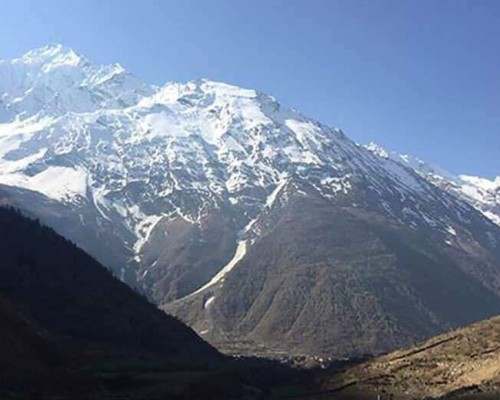 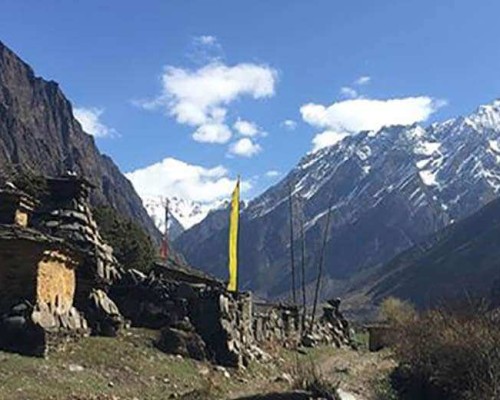 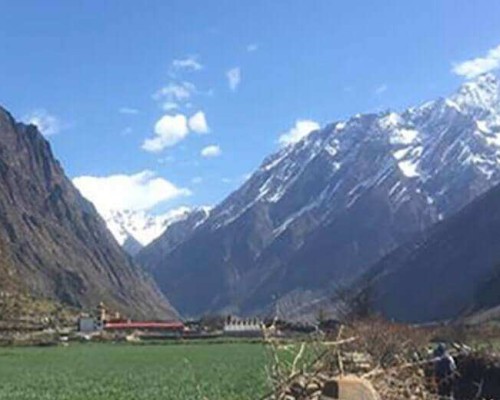 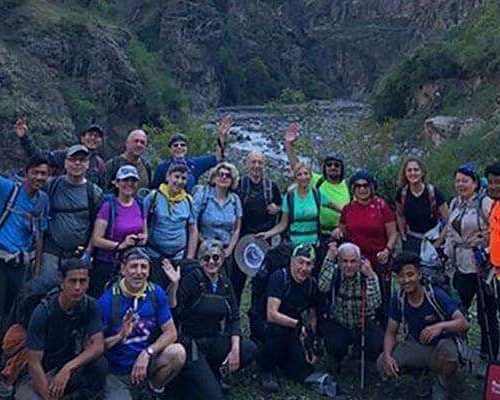 Tsum Valley Trek begins upon your arrival in Kathmandu. Our representatives will warmly receive you at Tribhuvan International Airport and transfer you to the hotel. Enjoy a refreshment at the hotel. In the evening, we’ll treat you to a delicious welcome dinner. In the meantime, you can enjoy strolling around Thamel Town. Overnight in Kathmandu.

The day begins with a delicious breakfast. Your trek guide will brief you about the trek in detail. He will visit the appropriate trek offices to obtain the essential permits. In the meantime, you'll embark on a scenic, cultural tour of Kathmandu City and explore some of the most popular historical and cultural sites.

An experienced tour guide takes you to some of the most popular UNESCO World Heritage sites, including Swayambhunath, Pashupatinath, Kathmandu Durbar Square, and Boudhanath. The well-guided tour offers insight into the UNESCO sites. You can explore the heritage of Kathmandu City and trace the history of Hinduism and Buddhism. Overnight in Kathmandu.

Leaving Kathmandu, you’ll embark on your starting point of the trek. After enjoying a delicious breakfast, you’ll get on a private jeep and begin driving through the scenic Prithvi Highway. The road journey goes along the massive Trishuli River and later takes a detour north to Gorkha District.

The historical Gorkha district goes along the Budi Gandaki River towards the bustling Arughat Bazaar. Arughat Bazaar in Gorkha District lies 126km west of Kathmandu City. Upon completing a 7-8hr long journey, you’ll reach Arughat, where you’ll spend the evening witnessing the lifestyle and ambiance of the locals. Overnight in Arughat.

Leaving Soti Khola, you’ll begin climbing upstream to reach another serene river of Machha Khola. The upstream climb of 177 meters takes you through the beautiful Sal forests. The trail climbs along the Budi Gandaki River and continues for another 4-5hr. Upon crossing the Sal forest, you’ll continue climbing through rocky ridges towards the Gurung village of Lapubesi. Enjoy a delicious lunch, and then continue trekking alongside the Budi Gandaki River to reach Machha Khola. Overnight in Machha Khola.

Leaving Machha Khola, you’ll continue on your trail along the Budi Gandaki River. The trail is covered with lush Sal forests on one side and a massive river on the other that goes north towards Thado Khola. Cross the Thado Khola to reach Khorlabesi. The trail goes along the lush fields of coffee, buckwheat, and tobacco towards Tatopani. Leaving the forested site, you’ll enter a narrow gorge that leads directly towards Tatopani. Enjoy a delicious lunch before continuing on your trek to Dobhan village. Overnight in Dobhan.

Leaving Dobhan village, you’ll begin climbing uphill along the Dobhan River and continue towards the confluence at the east of the Budhi Gandaki River. A short hike brings you to Thulo Dhunga. Cross an old suspension bridge over the Yaru River and continue trekking towards Thado Bharyang. The trail gently climbs uphill towards the village of Jagat, where you can enjoy your lunch. Leaving Jagat, you’ll begin trekking towards Philim via Sirdibas village. Overnight in Philim.

Leaving Philim village, you’ll begin climbing above Budi Gandaki Valley towards Chumling village. The trail rises through the narrow ridge and continues towards Chisopani village. You’ll enter the scenic Lower Tsum Valley and begin climbing uphill along the south side of the Siyar River. Continue trekking along the colorful grain, potato, and bean fields overlooking the beautiful Shringi Himal. The trail briefly descends to Gumlung village and then continues to climb upstream along the Siyar River towards Chumling.

Leaving Chumling, you'll begin climbing upstream along the Siyar Khola. Enjoy the beautiful sight of Ganesh Himal Range along the exposed ridge. The trail continues past traditional Tibetan-styled settlements towards Ripchet village (2468m). Enjoy a delicious lunch, and then continue along the trail to Rainjam village. Continue climbing upstream along the Serpu Khola to reach the village of Chhokangparo. Overnight in Chhokangparo.

Leaving Chhokangparo, you’ll begin climbing through the rocky terrain towards Lama Gaon (3202m). A short uphill trek brings you to Milarepa Piren Cave. Milarepa Cave in Tsum Valley is known as Piren Phu, which translates to pigeons cave. The locals believe that the revered saint Milarepa meditated in the caves. You can choose to visit the nearby gompas, Tara and Milarepa. Leaving the caves, you’ll begin climbing upstream along Shiyar Khola and continue trekking past Pangdun (3258m) to arrive at Chule village.

Wake up to the beautiful view of the Mu Gompas. After enjoying a delicious local breakfast, you'll embark on a tour around Mu Gompa valley. Begin exploring the rocky moraines and glaciers surrounding Mu Gompa. Leaving the gompas behind, you'll begin climbing the local landmark, Pika Himal. The local peak measures 4,865 meters in altitude and lies just a few kilometers away from Mu Gompa. From the top, you can catch the natural sights of Mu Gompa, Shiar Khola, and scenic mountains. Overnight in Mu Gompa.

Leaving Mu Gompa, you’ll begin climbing downhill along the Siyar River towards Lamabagar. Upon arrival, you may find yourself standing in front of Rachen Gompa. Rachen Gompa is the only nunnery in the region. Upon visiting the beautiful site, the local nun may offer local delicacies and Tibetan tea. Leaving Rachen Gompa, you’ll begin traversing Milarepa’s many caves and head towards Gonhgye Gompa. Overnight in Rachen Monastery.

Enjoy a delicious local breakfast at Rachen Monastery. From here, you’ll begin climbing downhill along the Shiar River towards Lamagaon. The rugged trail brings you back to Chhekampar village. Walk past a small monastery and cross the wooden bridge to reach Dumje village. Dumje is a small settlement consisting of no more than eight houses. After lunch, you can consider visiting the local Lungdang gompa.

Leaving Dumje village, you’ll begin retracing your path and continue trekking downhill. The scenic trail along the Shiar Khola takes you towards Lokpa village. The trail continues through a lush forested path and heads along the Samba Falls towards Philim village. The entire journey may last anywhere from 6-7hr. The relaxing trek brings you closer to the Budi Gandaki River. Overnight in Philim.

Today is an easy trek day. After enjoying your breakfast, you’ll retrace your path along the Dobhan River towards Tatopani village. The scenic trail continues downstream along the Dobhan River and goes past Jagat village to reach Tatopani. After arriving early, you can consider taking a dip into the natural hot spring at Tatopani. You may find both locals and foreigners taking a dip into the water. Overnight in Tatopani.

Leaving Tatopani, you’ll begin retracing your path back to Soti Khola. The trail goes past Sirdibas village, which boasts of large decorated terraced fields. Continue walking through the dense settlement and take the downhill trail along the Budi Gandaki River to reach Khorlabesi village.

You can enjoy your lunch at Khorlabesi. Upon completion, you’ll exit the forested village and continue trekking downhill through Tharo Khola to reach Macha Khola. The final leg of the trek follows the Budi Gandaki River towards Lapubesi village and takes you past two large waterfalls to reach Soti Khola. Overnight in Soti Khola.

Leaving Soti Khola behind, you’ll embark on the last leg of the trek. The trail begins to climb down along the Khola and trek past lush villages en route to Kyoropani. The trail continues downstream along the Kali Gandaki River and reaches Arughat Bazaar. The entire trek may last a few hours. Upon arrival, you can enjoy your lunch, and spend the evening exploring the beautiful town. Overnight in Arughat.

Leaving Arughat Bazaar, you'll begin driving back to Kathmandu City. Enjoy a delicious breakfast, and then get on a private jeep. Bid farewell to the beautiful Gorkha District as you start driving downhill along the Budi Gandaki River. Upon exit, you'll continue driving through the Prithvi Highway along the Trishuli River. The entire road journey may last 7-8hr. Upon arrival, you can choose to relax in the hotel or head out to explore the beautiful city. Overnight in Kathmandu.

The day begins with a delicious breakfast. Today is the rest day in Kathmandu. You can choose to embark on a cultural tour around the neighboring cities of Lalitpur and Bhaktapur. If you need a relaxing time, you can choose to visit the local massage center in Thamel. Overnight in Kathmandu.

The Tsum Valley Trekking trip officially ends today. Bid farewell to Kathmandu City as you begin driving to the airport. We’ll drop you off two hours before your flight time.