Cho Oyu Expedition is the most popular 8000 meters peak to climb. It is the world's sixth-highest mountain and stands astride the Nepal-Tibet border, just 70 kilometers west of Everest. Climbing Expedition on Cho Oyu from Tibet is one of the most straightforward to climb, with the highest success rate than any other 8000 meters mountain. The usual route ascends the northwest face from the Tibetan side of the Nangpa La, the old trading route to Nepal.

Despite the relatively non-technical nature of Cho Our climb, you MUST have some mountaineering experience and have been to 6000m before, like Island, Lobuche, Mera, and Chula peaks. Expedition members should be able to ascend and descend fixed lines independently and proficiently with crampons on steep ice or snow slopes. Members should also be in good physical condition for an increased chance of success.

Mountain Monarch's primary goal is to help you summit Cho Oyu safely with the most significant amount of personal fulfillment and fun. For us to achieve our objective, enormously experienced staff supports our Cho Oyu expedition.

The proposed itinerary of the Cho Oyu expedition in Tibet allows enough time for proper acclimatization, rest days, and several returns to base camp, where the kitchen and base camp staff can look after all of your needs and quell your appetite. After three days of trip preparation in Kathmandu for the expedition, we took a flight in and to Lhasa to get to the Cho Oyu expedition base camp in Spring 2017 as the road transportation between Nepal and Tibet is still not entirely operated after the 2015 earthquake in Nepal.

We set up our camp at Chinese Base Camp and stayed two nights or more, depending on our members' feelings. Base camp is a temporary but comfortable affair with a dining tent before hiking up towards the advanced base camp begins. ABC is in the heart of the Himalayas at 5700 m, surrounded by celestial peaks. There is also the high pass called Nangpa La nearby, an old but still used yak track trading route between Nepal and Tibet. From ABC, we can see the superb scene of Cho Oyu. This is the main base camp, and we plan to stay there for the whole Cho Oyu expedition to look at the favorable situation for the trip.

Camp 1 (6,400 m) approached in 6-8 hours via an initial walk up the Gyabrag Glacier and then up steep scree to a broad snow shoulder and camp 1.

Camp 2 (7,000 m) We follow the snow ridge out of camp 1 to a steep 50 meters ice wall, which provides the most challenging climbing on the route; however, it is relatively straightforward, and we can place fixed ropes. Usually, the journey to camp two is completed in 7-9 hours.

Camp 3 (7,400 m) Once again, on the easy ground, the journey to camp 3 takes around 4 hours, but at this altitude, an accurate determination is needed to deal with the effects of size.

Summit Day It takes 6-8 hours to reach the summit, initially up easy snow and rock to the summit plateau, at which point it is only altitude, weather, and fitness that will stop you from reaching the sixth-highest summit. 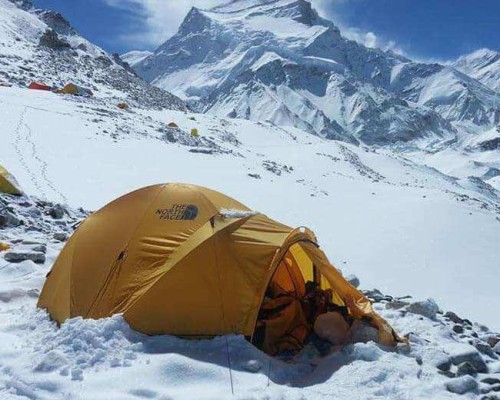 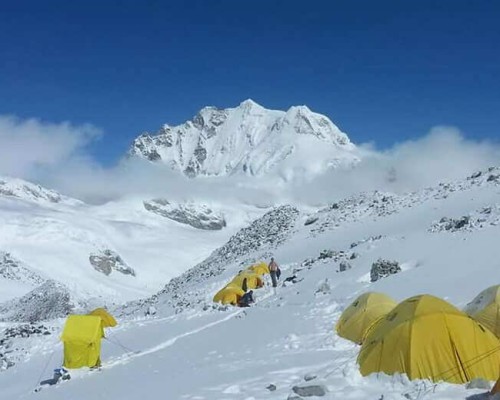