Heli Day Tour to mt. Everest
Make an Inquiry
Outstanding Heli ride to Kalapathar to stand next to the Everest with Oxygen cylinder

Everest Base Camp Helicopter Tour with Landing at Kalapathar next to mt. Everest

The Everest Base Camp Helicopter Tour is one of the best available options who have limited time to get so close to the glistering mountains including Everest. In reality, Helicopters fly almost in touching distance to view the spellbound wonders of this parade of towering peaks. Of course, the scenery is simply ecstatic when you get to see them on tip of your nose.

Everest Base Camp Helicopter Tour with Landing in Nepal starts at Kathmandu airport. Notably, it is one of the most pleasurable and thrilling space journeys to explore the vastness of the Himalayas. Not to mention the Helicopter ride journey in the sky will reward you with breathtaking portraits of the Himalayas, tranquil green valleys, and glittering snow peaks. We also land on the viewpoints to explore the region and get the real photograph done before we take a flight back to Kathmandu to end the exhilarating Helicopter day trip.

Taking a helicopter day tour over the Himalayas is a truly magnificent and awesome adventure filled with awe-inspiring scenery and glistering peaks. Explicitly Everest base camp Helicopter tour with landing at Kalapathar in Nepal is best suited to those who wish to witness the vastness of Himalayan wonder in a short time duration without any physical challenges. Mountain Monarch customizes the day Everest helicopter tour as per the requirements of an individual or group of friends or family. Uniquely we have been running the Himalayan Heli trip covering the visit of all 8000 meters peak's base camps in Nepal. This means you can leave your footprint on all the high Himalayan peak base camps in less than a week's time. Truly a very special Heli trip in the Himalayas.

Everest Helicopter Tour with Breakfast on Top of the World

Time duration: 4:00 hrs. Including the ground time in Kalapathar or EBC, Pheriche and Lukla
Cost: US$ 6000 only in a group of 04 pax per helicopter
Best time: September - December and January and June

Undoubtedly Everest base camp helicopter tour with landing is one of the most popular Heli tours in the Himalayas. The dream come true trip having Breakfast on the World's top mountain. In general, the flight takes off from Kathmandu early in the morning at around 7 am. Notably, The helicopter will fly parallel to the Himalayan range giving you a wonderful feeling of being close to the mountains as you cruise along towards the hotel Everest View.

Everest Helicopter Tour with Proper safety back up: Dedicated Oxygen

On the way to Kalapathar and Everest base camp, you stop over at a place called Lukla to refuel. The gateway to Everest region adventure trek and expedition. With a short stopover at Lukla, we continue our journey enjoying the views of the famous and tallest mountains of the world. We land at Pheriche Helipad before flying to the Everest base camp and Kalapathar Helipad. Importantly we make sure to have a dedicated Oxygen cylinder for each guest for the proper safety backup on the Everest base camp Helicopter tour. Obviously flying over 5000 meters and landing at Kalapathar to take photographs next to the mt. Everest could be challenging and life-threatening to many without Oxygen.

Actually, we land at Kalapathar Helipad with our medical trained guide allowing time to photograph next to Mt. Everest. Definitely a very special moment - a great sense of pride to witness the majestic peak of Mt. Everest close to you. Besides Everest, you will be able to see the famous mountains like Pumori, Lhotse, Nuptse, Ama Dablam, Thamserku, Kongde, Gaurishanker, Number and many others. All in all this Everest Heli tour will be an out-of-the-world experience that you will cherish forever. On your return leg, we fly over Thyangboche monastery to Lukla to refuel. Furthermore, return journey to Kathmandu to end this exhilarating Everest base camp helicopter tour to Mount Everest. 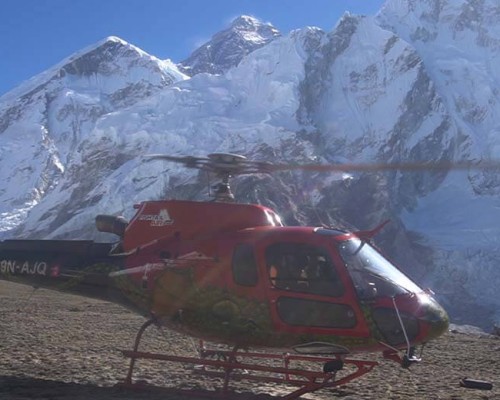 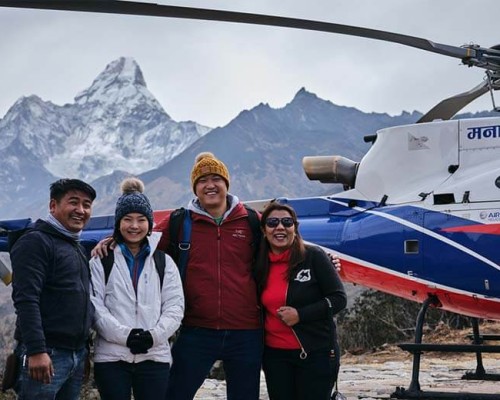 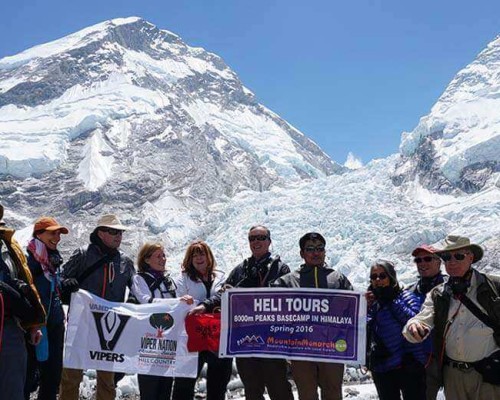 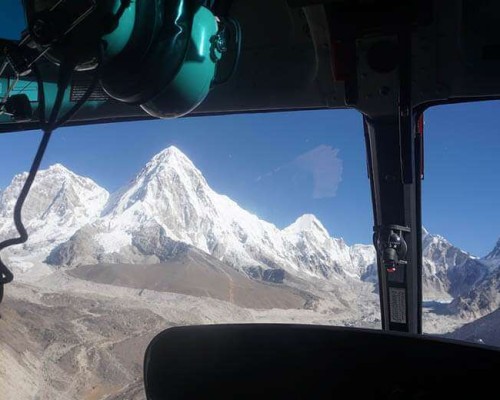 Helicopter day tour to Everest starts from Kathmandu airport at 7:00 am and it lasts for around 4 hrs depending on the group requirement.

Helicopter Day Tour Everest:- We land at Everest base camp or Kalapathar Helipad as close to Mt Everest. One can feel the adventure of being alive and get the photos with Mt Everest just next to you. All in 4 hours with Oxygen cylinder to everyone on board for safety.

All the things not mentioned on the trip cost inclusion

Just have a day in Kathmandu? Wish to get to Kalapathar or Everest base camp to feel the adventure of being alive: here is the Everest helicopter day tour to make it happen. Proper safety is a must in such an adventure to land at a higher elevation in a short time. Mountain Monarch has been leading this Everest base camp Helicopter tour with landing to the Himalayas in all the 8000 meters peak base camps. With our Heli tour experience, we can guarantee the proper safety. We can customize this Everest Heli tour on any date you are in Kathmandu in a group of 04 pax.