The Gokyo Lakes Trek is one the most picturesque of the beaten route in the Everest region. This Everest Gokyo RI Trek climbs up the Gokyo Ri and crosses the Renjo La pass to make a circle hiking on Everest. Probably the best alternative to classic trekking to the Everest base camp who wish to trek a relatively less trodden section in the Everest region. Undoubtedly this trek exhibits the solitary valleys, pristine turquoise lakes, stunning glaciers,s and a parade of snowy peaks together. We have designed this Everest Gokyo Ri trek itinerary with the hike to the Gokyo Ri, cross the Renjo La pass to explore both Gokyo and Bhote Koshi valleys in the Everest region. Arguable the Renjo la pass offers the best vantage point in the entire Everest region. Notably, four of the eight highest peaks of Lhotse, Makalu, Cho - Oyu, and Everest hover on the horizon with sparkling lakes. Thus it makes a circuit trekking rather than retracing the same way as most of the classic Gokyo Renjo pass trek programs.

Gokyo lakes  Trek - an exploration of the high alpine yak pasture, Sherpa culture and sparkling glacial lakes next to the Everest.

Obviously, during our Everest Gokyo lakes trek, we explore and enjoy the Sherpa hospitality. Besides that, we ascend through the rhododendron and conifer forest to the yak herders' settlements of sacred lakes in Gokyo valley. In fact trekkers' paradise valley of vibrant turquoise lakes which are set among like jewels midst the highest snowy peaks. Spectacular but challenging traverse onto the Renjo la to the dramatic solitary Bhote Koshi valley. This  Everest Gokyo Ri trekking route put you on the historical trade route between Nepal and Tibet. Expect to encounter the native Tibetan traders in this section. An exploration hike of Thame valley unveils the unspoiled Himalayan vistas at their best as we descend to Lukla to end the adventure journey to Gokyo lakes and Renjo la pass in Everest.

We follow the responsible trekking policy to have 1 trekker:1 Porter on this Gokyo Ri Trek. Safety of trek members and crew on top agenda. Above all, we carry the Oxygen cylinder on your trip to Gokyo lakes trek on Everest as a safety backup at a very competitive cost. We choose the different and less trodden trekking route and map to complete this Everest Gokyo Renjo pass trek.

Besides this Gokyo Lakes Trek, we also offer the curated trip to Everest Base Camp Trek and Everest Circuit Trek which is the combination of hiking to Gokyo lakes with Everest base camp hike crossing the challenging hike to Chola pass in Nepal. 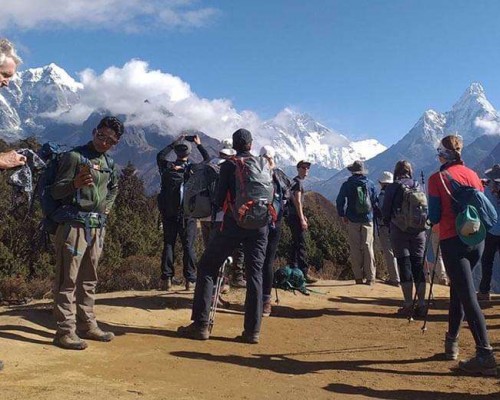 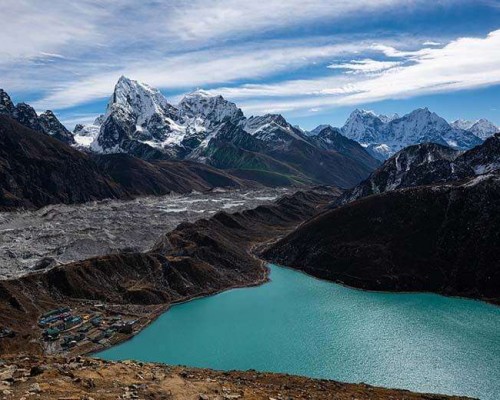 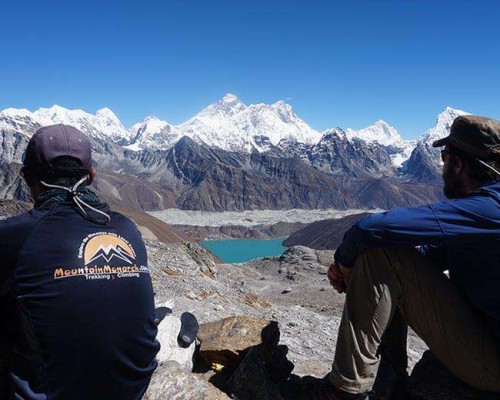 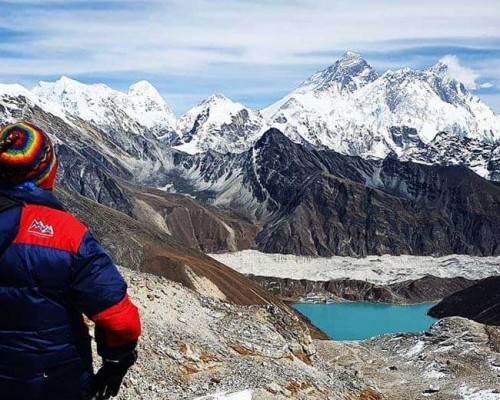 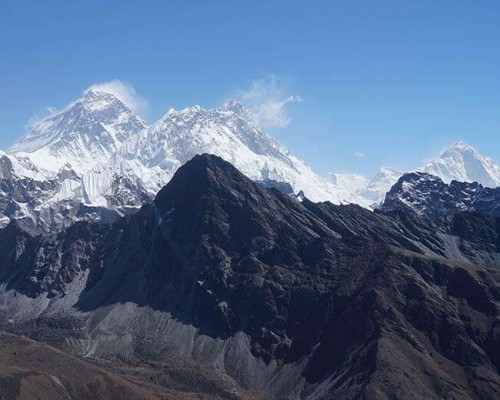 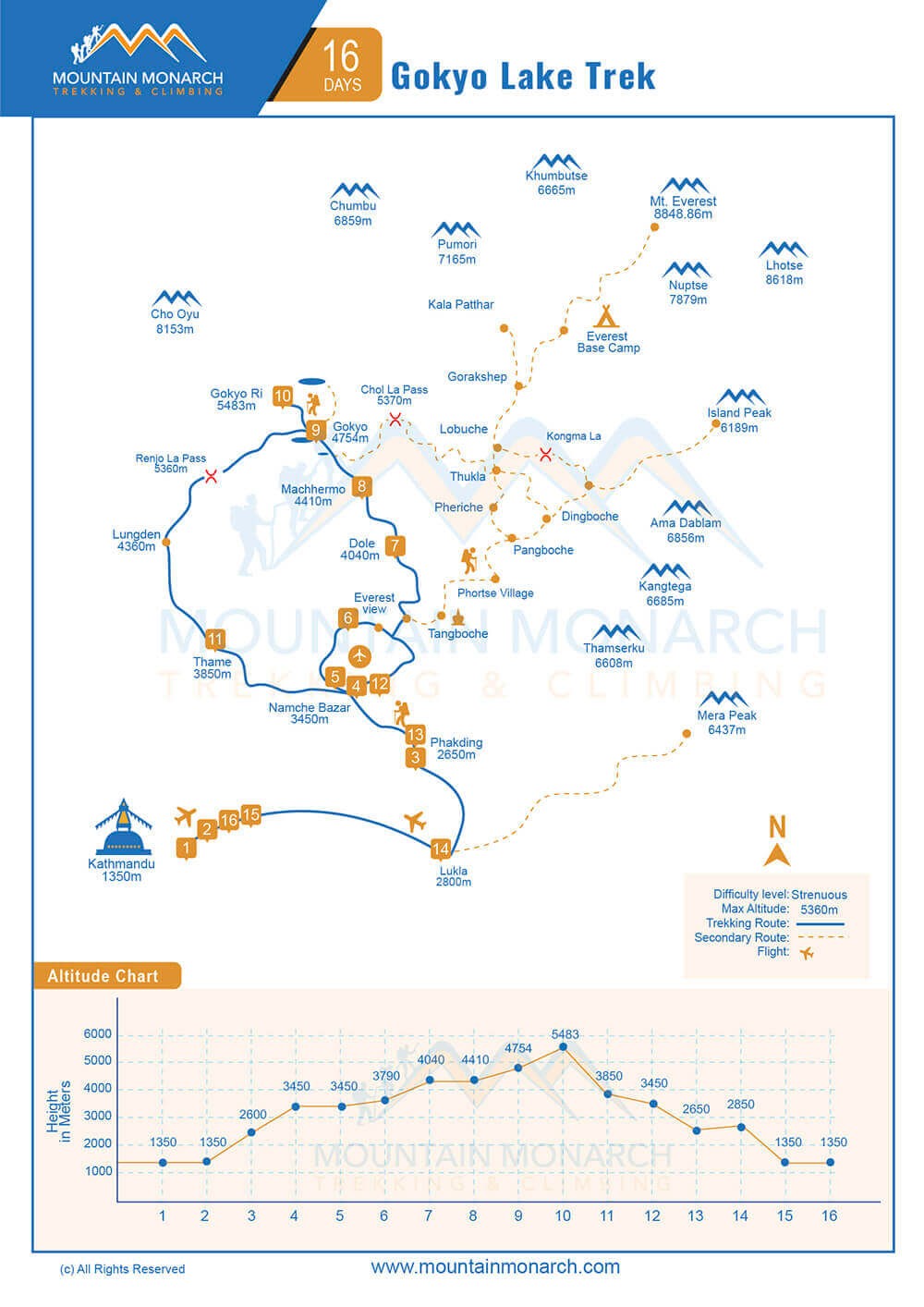 Your designated Group Leader will be there to greet you and transfer you to the hotel. Simply relax and take pleasure in the fun of driving through unfamiliar roads.

Today would be the most exhilarating day where your leader introduces you to our city tour expert who guides you to the most pious Hindu and Buddhist religious places that are listed in the world heritage sites and elucidates to you the entire mysticism over its existence.

This 3 – 4 hours easy walk on the legendary trekking trail through the cultured Sherpa villages with its exceptional beauty and the view of stunning Dudh Koshi gorge, landscape, and the deep valley is unique.

One great adventure of a lifetime. Despite long hours walk it’s far more than just trekking. Give time to adapt your body to thin air. It’s not a matter of proving your physical strength, it's more about taking pleasure with steady ascend.

A short and relaxing walk to the “Valley inside the Clouds”, Khumjung, situated at the base of the holy mountain Khumbiyela is exceptionally sensational.

One of the best trails leading you to the valley of Gokyo.

Trek to Machhermo is another easy and short day.

Next fabulous day that offers you outstanding mountain views together with a dazzling series of turquoise blue glacial lakes.

A very challenging day to summit Gokyo Ri for the most exceptional view of Everest and its neighboring peaks.

Detail daily trekking route info on this Gokyo Ri Trek in the Everest region of Nepal.