Make an Inquiry
Our trekkers at the south base camp of mt. Kanchenjunga

Kanchenjunga Base Camp Trek is an ideal circuit trekking route in the Kanchenjunga region in the easter part of Nepal. This Kanchenjunga trek best suits those who have time and desire to venture into some remote areas of Nepal's Himalayan kingdom. Mt. Kanchenjunga is the third highest mountain in the world at an elevation of 8586 meters, striding the border between Nepal and India. It is also a natural paradise that offers a tranquil and picturesque trekking experience into the wilderness of the less-trodden Himalayan region in Nepal.

Kanchenjunga circuit trek explores the less trodden and unspoiled region of the easter part of Nepal. Where we encounter the ethnic group with their unique culture and tradition; here, you can experience the tropical to subtropical forests of rhododendron, oak, and chestnut. Furthermore, the high Alpine zone is dominated by enchanting views of the snow-capped Himalayas, which are fascinating with the glacial plateau and beautiful landscape. Additionally, the traditional village settlements of Rai, Limbu, Gurung, and Sherpa with their solitary culture and lifestyle. This Kanchenjunga base camp trekking region is also well known as the home of the Red Panda, snow leopard, and other snow animals, birds, and plants. This Kanchenjunga trek area in Nepal is protected and controlled by (KCAP) Kanchenjunga Conservation Area Project, established in 1997. There are two North and South Base Camps at 5400 meters of this vast, massive mountain situated right on the border of Sikkim in the east and Tibet in the north of Nepal.

This Kanchenjunga base camp trek begins along the Tamur River through Pipal trees and villages. Whereas the modern world little touches traditional life. This includes those of the Limbu people, famous for inventing Tongba (the highland concoction made from fermented millet). They are the mainstays in the British Gorkha Regiments. Passing through some of the country's most pristine oak and rhododendron forests brings you to harsher high terrain. Crossing the Mirgin-La pass at 4725 meters on this Kanchenjunga trek gives you views of Makalu, Chamlang, and Everest. Next, you will pass the glacier, and finally, you will be rewarded with an incredible, close-up view of the Kanchenjunga peak as you approach the Kanchenjunga base camp at Pang Pema. While exploring the surrounding area, we will also see a panorama of Wedge Peak, The Twins, Pyramid Peak, and Tent Peak in our Kanchenjunga circuit trek. 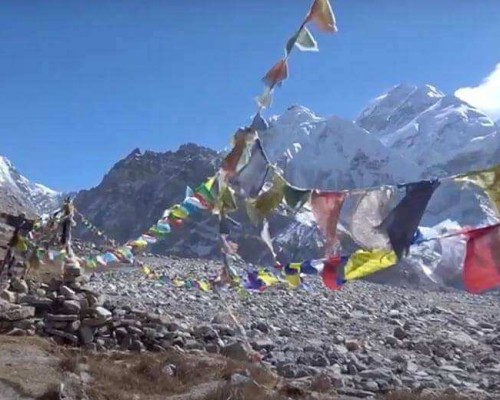 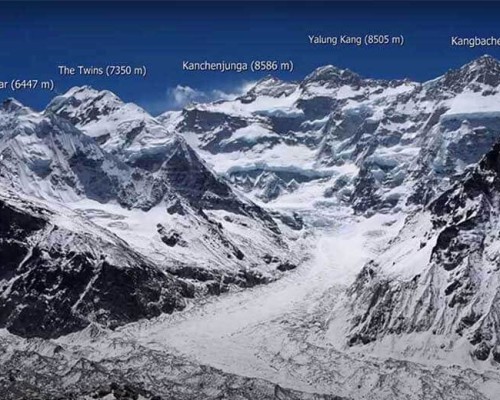 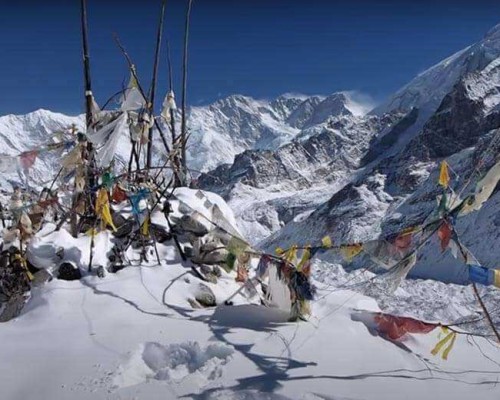 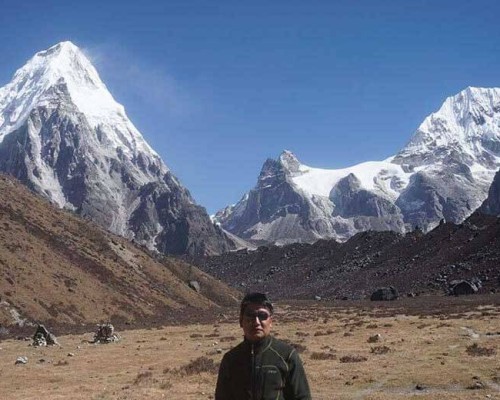 Details and daily Trek itinerary of Kanchenjunga circuit trek in the Himalayas.